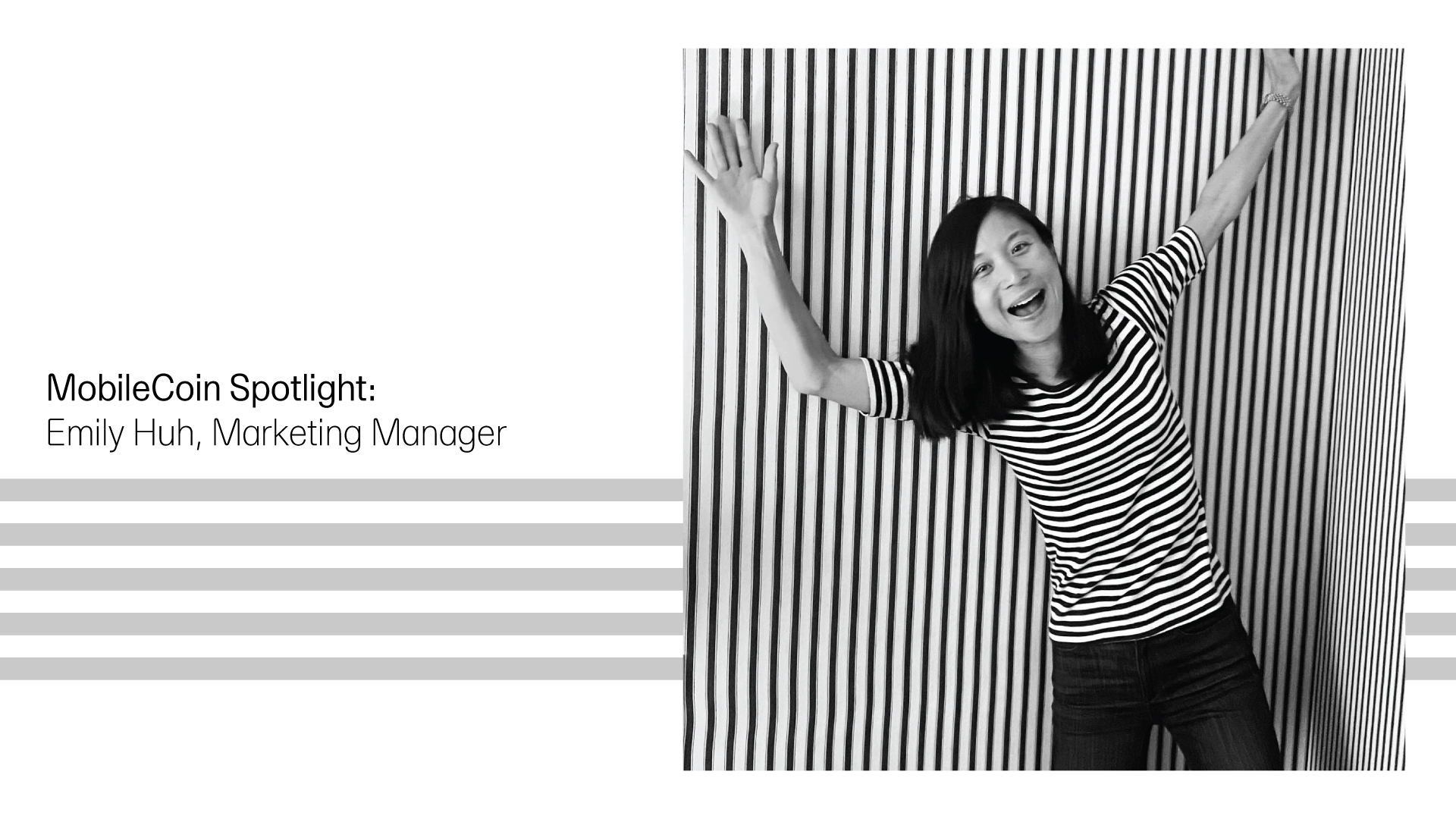 Hey Emily! Thanks for taking the time to chat today! First off, what’s your relationship to MobileCoin?
Hey! I’m the Marketing Manager at MobileCoin and have been since the end of March 2021.

How did you first find your way into the world of cryptocurrency?
My husband, Ben, has been in the Crypto world for years now. He was actually offered essentially free Bitcoin at one point but was like, “yeah, I don’t have time for this” and passed it up. It’s amazing to consider how much that’d be worth today. Since then, I’ve done a bunch of research on different tokens, NFTs, and Crypto technologies, but I feel like there’s always so much more to know.

Wow, yeah, it’s kind of a lot to wrap your head around. I think Ben’s in good company, though. I feel like I’ve heard a lot of stories of people not taking Crypto seriously at first. So, what drew you in about MobileCoin?
I had heard about MobileCoin’s reputation of being an awesome work environment where you could truly be yourself, so when my friend, Brady, mentioned that MobileCoin was hiring, I was like, “why wouldn’t I want to be part of that?!” Then there was the MobileCoin Radio show, and the emphasis on art; I loved how they were pushing the envelope… Also, as it turns out, MobileCoin is a very feline-positive environment.

Haha, yeah, the cat game is strong. You’re a cat lover; do you have a cat?
I don’t have cats because both Ben and I are allergic, but I love cats. I’m always soliciting cat pics, and I’m something of an Internet cat enthusiast.

Do you have a favorite celebrity Internet cat?
Let’s see… My favorite cat? There are so many… I’ve met several… Well, I met Grumpy Cat!

You met Grumpy Cat?
My previous startup, Cheezburger, featured a lot of famous Internet cats, so at one point, I met her. Grumpy Cat is female, by the way. I’ve also met Little Bub.

Haha, wait, what were the circumstances? Did you like, fly to meet these cats?
Sort of, it was at South by Southwest… So, it turns out that these Internet cats have managers who book shows and signings and negotiate pay, and I knew Grumpy Cat’s manager.

I’m imagining that Grumpy Cat’s manager is like, wearing a suit and has dark glasses. Is that true?
No. He was actually kind of the opposite; he was quite too cool for school. And he actually managed a lot of Internet celebrities like, do you remember Scumbag Steve?

Wat
Yeah. So we sort of got the VIP treatment and got to skip the long line of people waiting to meet Grumpy Cat. I consider myself very lucky, haha. Also, Little Bub’s owner was really into supporting charities and shelters, and since that’s really important to us as well, we hit it off.

So you just really like helping cats. That’s fantastic. You still haven’t told me who your favorite Internet cat is, though.
Well, of the ones I’ve met, it’s got to be Little Bub, but I’m also really into Maru and his boxes.

Okay, now for the big question. Did you start the famous website I Can Has Cheezeburger?
Well, my husband and I started a separate pet blog in January of 2007, but I Can Has Cheezburger was originally started by a couple in Hawaii. We met them because of the reporting we were doing during the pet food recalls of 2007, so when they came to us for support in helping grow their website, we agreed.

Wow, so it really stemmed from a love of cats… and the rest is Internet history?
Yep.

What was it like running a company like Cheezburger?
So it literally started as me posting funny cat photos at night after coming home from my day job, but eventually, the company grew to around 135 people, and I started doing all sorts of strange things. One day I’d be approving T-shirt designs; the next day, I’d be meeting celebrity cats, and once, I even starred in a reality TV show.

You what?
Yeah. It’s a six-episode show kind of like “The Office” featuring my husband and me along with our co-workers and all that goes into running humor websites. The show was called LOLwork, and it aired directly after Top Chef. It was weird because the cameras would be rolling at 7 AM, and we had to do actual work while the crew was filming. We had special TV-ready laptops we had to use; certain situations were emphasized especially when there were conflicts, and of course, lots of cats were featured. All in all, it was a really cool experience.

That’s amazing, and now I really want to watch this series. Besides being an Internet celebrity and cat advocate, what do you like to do outside of work?
I love to run and just be outside in nature. I also love to cook. Specifically baking. I feel like I could have been a pastry chef in another life. There was a time when I wanted to open a waffle shop. Belgian waffles are great but have you had liége waffles? They’re amazing. I spent probably two months feeding them to Ben for breakfast, lunch, and dinner while I perfected my technique. They have this amazing caramelization on them. I’ll have to make you one some time.

Ah, yes, please. Okay, last question. Here at MobileCoin, we think a lot about the future, so I thought it would be fun to ask every person I interview about the transhuman or cybernetic enhancement they plan on getting when they become available.
Oh, what would I get? I don’t know, maybe this sounds really lame, but I have really bad vision. I’m legally blind, so I’d probably get that corrected. Haha, maybe I just want to be a normal human, not a super-human. I think I’d just like to be able to find my way back to camp when my contact lenses fall out at Burning Man. I guess that’s not actually all that cool.

You know, I actually really like that answer. Some of the most important technological innovations provide simple quality of life improvements. In many ways, that’s what we’re trying to do here at MobileCoin, just make life a little better for a lot of people. Well, Emily, this has been really fun. Thank you for taking the time to chat with me today!
Thank you!

Do you love the MobileCoin team as much as we do? Want to be part of it? Join us. While you’re at it, Sign up for our mailing list! More from the Journal 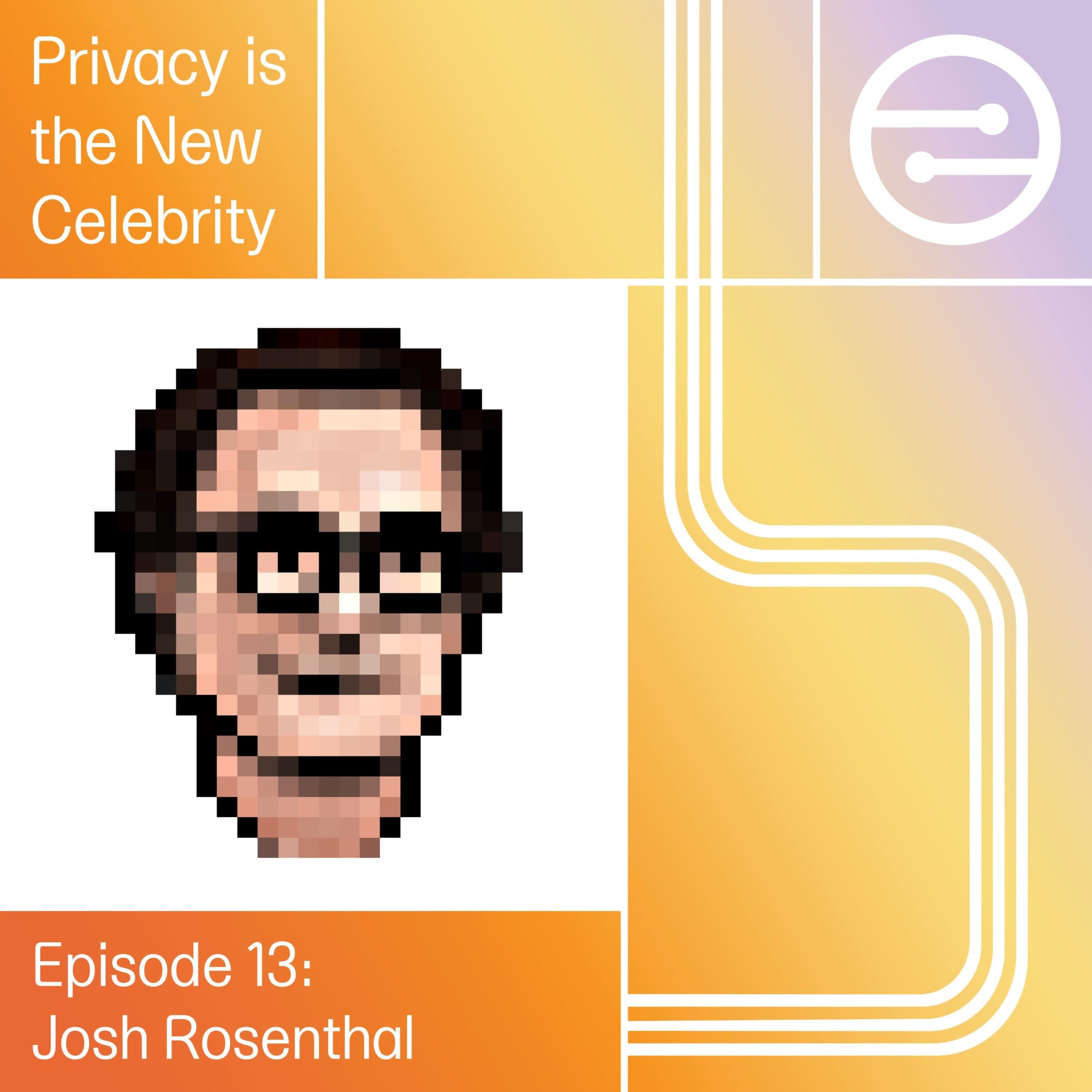 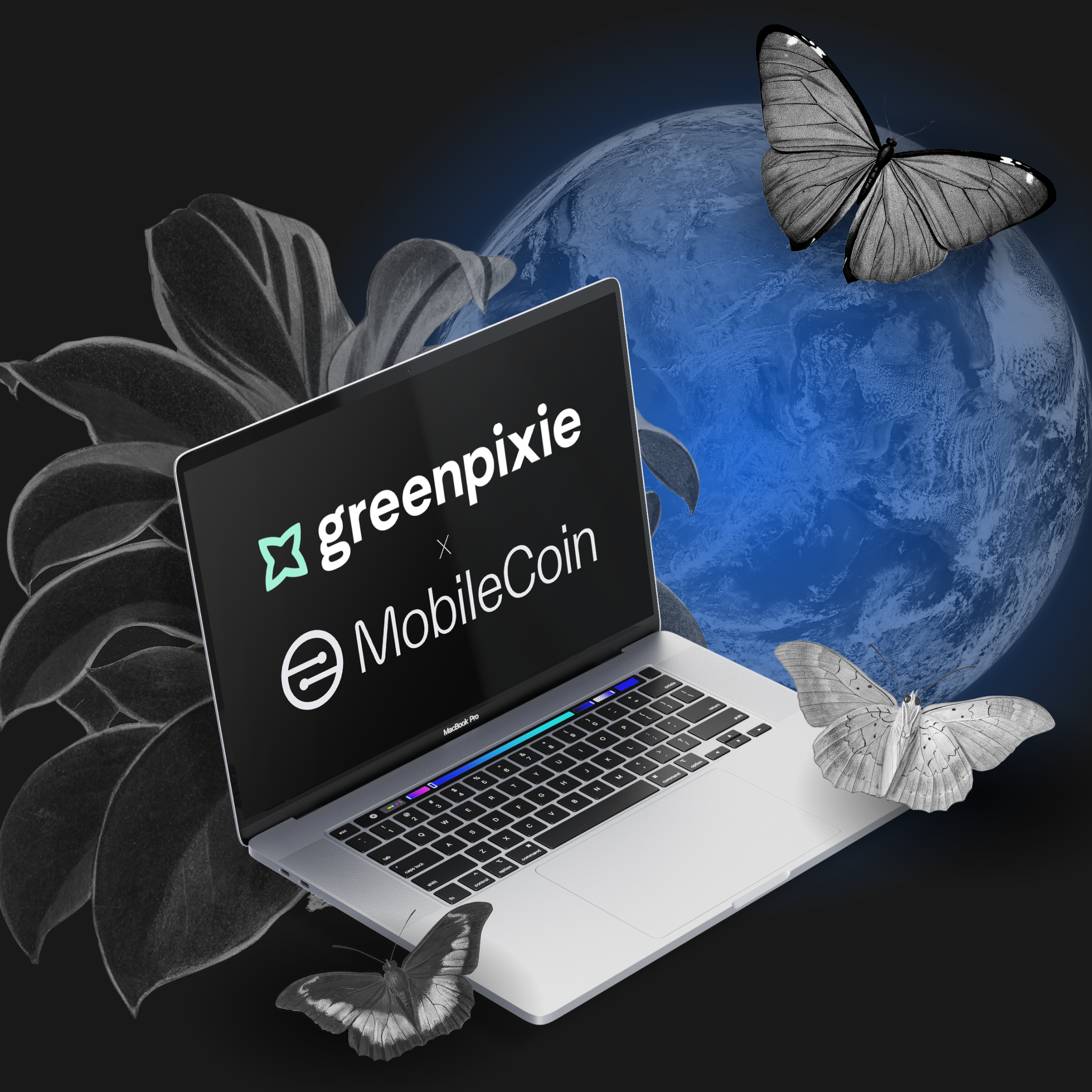 MobileCoin honored with a Top 5 Award for our low digital carbon footprint! 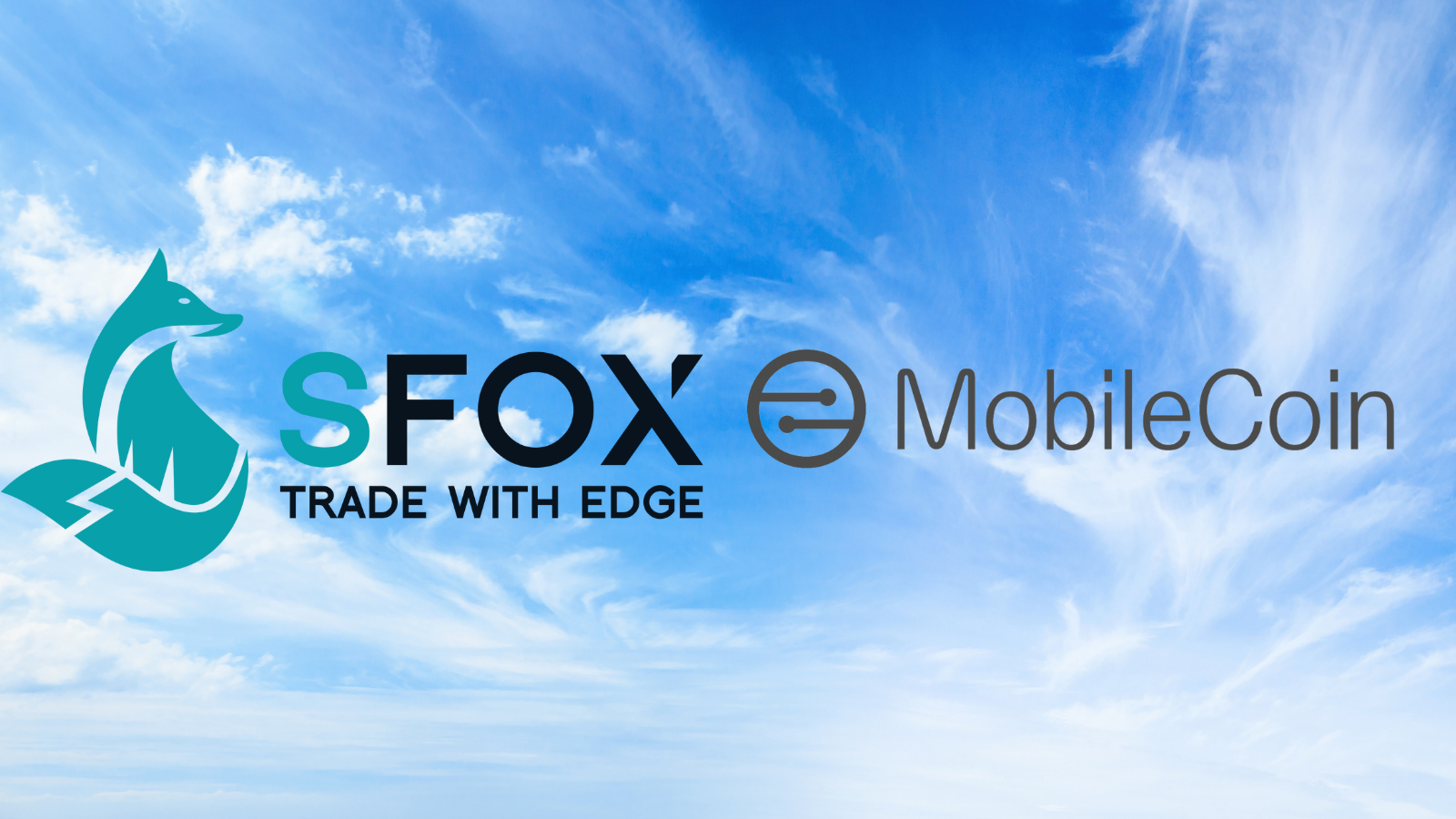